skip to main | skip to sidebar

I was running down Wisconsin yesterday morning, before 7 AM but with a fair amount of traffic, when I saw a woman standing on the side of the road take off her shirt - it looked like she was going to change but I passed her before I saw if she did.  She had nothing on underneath.

No pictures.  Sorry about that.
Posted by Juliet at 10:52 PM No comments:

Running: Where I'm at now

I usually have one or two obsessions going on at once, and for now it seems to be running.  So here is what I'm doing.

You'll note my last post before my blogging hiatus was about my first 5k.  I started running using the Couch to 5k plan in the spring of 2010, with the goal (which seemed ambitious enough at the time) of completing the Geneseo Trio, three 5ks in our new hometown, that fall.  I did them all, with my fastest time, 38:05, in the third.  Anyone who runs knows this is not really that fast; I didn't run every step of the way, and I kind of bonked in the second of the three, which was on SUNY Geneseo's hilly campus on an unseasonably hot evening and only had one water stop (which itself is not unusual for a 5k, but it wasn't enough for that day and course).  But I got a neat pint glass, filled it with beer, and felt good about myself. 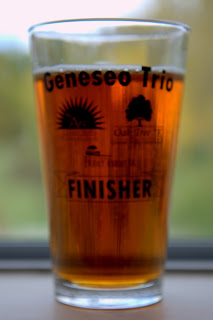 I didn't keep up with running that winter - it was cold and there was always a bit of snow on the ground - and then I got pregnant and had a baby, so I went about a year without running at all.  Justin encouraged me to start running again in SLC.  We lived in a hilly part of a city which is right up against some big fat mountains.  I contrived a route whose hard uphills were on the warmup and cooldowns and managed to cover about three miles a day, a couple times a week if I was diligent, without making myself go uphill.  I did a couple of not very serious 5ks - one we walked as a family, one I (mostly) ran but on a course that ended up being short - and contemplated doing one of the various longer races down various canyons leading into SLC, but never got around to it.

And then we moved again, to DC.

I'm not sure what it is that made me decide at this point to get more serious.  I asked Justin for a jogging stroller for Valentine's Day (BOB Revolution SE, love it) and started running a couple of days a week after I dropped Auletta off at school.  For a few months I again contrived routes that were either downhill for a couple miles and then an uphill walk back (I figured as long as I was covering four or five miles I was entitled to run only two) or three miles down to Dupont Circle and the metro back home.

While visiting Justin's parents in Ithaca over spring break, I left the kids a couple of times and ran by myself, just slow, exploratory jaunts to, through, and back from Sapsucker Woods.  I didn't go fast, but I realized I could go for an hour/4+ miles more or less without stopping, which I hadn't really done before.  It wasn't particularly hilly, but I wasn't avoiding hills, either.

In May, I ran the Susan G. Komen 5k in DC, because why not, and 1. ran the whole thing 2. setting a PR of 34:57.  Under 35 minutes!  It was the first essentially flat race I'd done, but I started feeling like I could run longer distances without taking absolutely forever.

A week later, Auletta finished school and we headed to Ithaca again.  I did a couple more runs by myself and got up before dawn one day to run 6+ flat miles at Cass Park, which is the farthest I've ever run; I did a two-mile loop three times and left a bottle of water and a couple of granola bars by the car for brief stops.  (Note to self:  granola bar really wasn't necessary until at least mile 4.)  The next week, at Justin's family's house on Kerr Lake, I did 4.5 mile out-and-backs at the crack of dawn to avoid the sun and humidity as much as possible (which it isn't, really) and had the small but distinct pleasure of running across state lines, which might come in handy someday, who knows.

Since then I've gotten up at to run 6 AM or earlier a few days a week so I can leave the kids home with Justin before they wake up, and before the weather gets oppressive.  I'm not avoiding hills anymore - they're hard to avoid in northwest DC, anyway.  I am running up hills.  I'm running the whole way.  And I'm doing it for three, four, five miles at a time.  I'm getting faster, not blazingly fast, but enough that I figure with a flat course and cooler weather I can probably pull a sub-30 5k sooner or later.  I'm losing weight - which started happening as soon as we moved to DC, since I rarely drive anywhere except the grocery store these days, and which in turn is probably helping me run faster and longer.  And while running still kicks my butt, I feel great the rest of the day.

I registered for two races this fall, the Navy 5-Miler and the Run for the Parks 10k.  And I'm planning to do a half-marathon in the spring.  I was looking over the comments on my blog from a few years ago and saw that I'd said when I first started running that walking 13 miles seemed easier to me than running three.  Now three miles is a short run.  This running stuff, it works.
Posted by Juliet at 12:39 PM 1 comment:

Tentatively back to blogging

I've tried to write a couple of comeback posts over the past almost-three years, and failed, I suppose because I felt like I had to sum up everything that's happened since then and, well, I can't. I'll try in a list in two bullet points.
I'm back because, while we have friends here, they're mostly in the unencumbered single/married but childless phase, and I need to feel more grounded here and meet people I have something in common with. So what better way than to sit in a room by myself and write a blog post in solitude like the introvert I am? And my old friends might want to see what I'm doing here with the kind of detail and relentless self-absorption that don't fit in Facebook status updates.

I ran a 5k last week. Finished in 38:29, which means I am slow, but I finished and I had fun. (Picture credit: North Street Studios.) 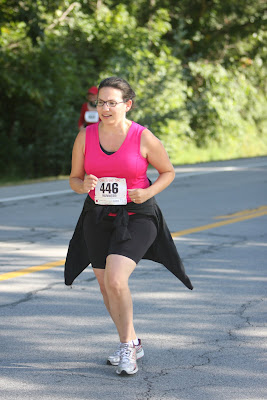 Yeah, I disappear for two months and then come back and write a political post, which is always a mistake. Oh well. This is half to share good links and half to expound my typically wishy-washy opinion.

First, links. They're better than what I have to say anyway. First, an article by the boss of a sort of second-degree friend on why the mosque actually helps us, national security-wise. The National Security Mosque.

Also: a comment from a National Review Online writer (dissenting from the majority view on NRO) that blocking the mosque would violate all kinds of conservative principles. A Very Long Post on Cordoba House (but read it all).

Salient paragraph from the latter: "Part of supporting limited government is understanding that sometimes, things you don’t like will happen, and the government (especially the federal government) won’t do anything about it. Getting to do what you want comes at the price of other people getting to do what they want—including build mosques where you’d prefer they didn’t." This is basically where I come down. The First Amendment means nothing if it doesn't mean that acts of speech and religious worship that offend or disturb someone aren't protected. You have a constitutional right to freedom of expression; you don't have a constitutional right not to be offended. As a Christian, and especially in my younger days when I participated in a high school Bible study that the school district decided to kick off campus for a year because they thought they had the legal right and/or obligation to do so, and as a descendant of all kinds of religious minorities who weren't always welcomed with open arms but found religious freedom in spite of nativist impulses (I mean Jews and Catholics, and also I'm descended from Quakers who got the heck out of England for similar reasons), I value my religious freedom. It would be hypocritical of me to deny it to anyone else.

This doesn't mean I'm totally comfortable with the idea of a Muslim religious center in that location (I am not proud to say this, but it makes me a bit uneasy), or that other people who live in New York or were more personally affected by 9/11 than I was don't have the right to voice their own grievances - their feelings may not be entirely rational, but they don't have to be rational to be legitimate. I often feel the strain between my desire to accept Muslims fully - and I've taught classes or sections of classes about Islam and had Muslim students and colleagues; I'm in a position that tolerance is important and necessary - and my anger at the violence Muslim extremists have committed. I also acknowledge that if the purpose of Cordoba House is to build bridges, it's a purpose that's clearly not being fulfilled. This is not really fair, since they can't determine how other people will receive them, but there's no way to begin public relations other than with the public's perception of you.

That aside, though, I'm becoming rather appalled at where public perception stands. I was not a big Bush fan and on the whole he probably did more harm than good in terms of winning the hearts and minds of Muslims worldwide, but he did set the tone right after 9/11 of distinguishing a radical fringe of Muslim extremists from the vast majority of American Muslims who are good people and live in harmony with people of other faiths. We've regressed in the last nine years to the point that few people feel even the need to make that distinction, whether in sincerity or as a politically correct veneer (which perhaps it always was for many people). I don't know where this is leading, but probably nowhere good.
Posted by Juliet at 4:56 PM 4 comments:

These were taken yesterday. Summer begins today. Here in Connecticut it's felt like summer for about a month. Seattle, I'm told, is still having what is typical winter weather. So never mind where the earth's axis is leaning.

These were taken with my new (to me, but used) digital SLR which I just got to replace the one whose fussy autofocus has annoyed me for the past four years. We have a trip coming up and I figured this was as good a time as any to upgrade. More on that soon.
Posted by Juliet at 11:44 AM 5 comments:

This is about three weeks late. And I never got all the pictures up on Smugmug, due to technical issues, but most of them are there. They're all on Facebook, and most of my blog readers are on Facebook now, so I have been really lazy about posting them, but then I remembered Justin's mom might not even have seen them and there is something wrong with that. So here's one. More here. I am mostly over the relief since we're moving on to the next half dozen stressful things we have to deal with (including now we have to pay off the loans or at least go through the hoops to get Yale to do it for a while), but YAY YAY YAY YAY YAY.